And really, that was the only thing I came to regret about my long long day trip by train through the beautiful landscapes of the Kanchanaburi province, on a special tourist package put together by the Thai Railways that departs from Bangkok’s Hualamphong train station, and which schedules in convenient stopovers at Nakhon Pathom, River Kwai Bridge, Say Yok Noi waterfall, Kanchanaburi city centre and other minor picture breaks.

Over 12 hours inside a 3rd class Thai train car, the only farang to be spotted in the whole train. A railway official who picks up a megaphone to replace a non-existent PA system, and cracks joke after joke while he’s supposing to describe the sights en route or the delicacies offered in the menu. A waterfall that’s meant be the highlight of the trip but which carries no more than a trickle of water. Tasting som tam so spicy that even my Thai companion cringes. Unforgettable scenery, inescapable historical landmarks, and so, so much sanuk (Thai fun). All for a sum total of 120 Baht.

The first challenge of the day was to make it to Hualamphong in time for the 6.30 departure. My target was to catch the first metro car at the Sukhumvit metro stop, just off the Asok junction. Walking swiftly on Sukhumvit road I blinked at the sight: the food stalls had turned into after-hours bars playing chill out music on dinky loudspeakers and were patronized by the most hardcore night creatures: mostly elderly Western men accompanied by tall Thai ladyboys or African sex workers. Too sleepy to take it all in, I stopped at the first 7-Eleven for my usual breakfast back then: oatmeal raisin cookies and a banana.

Fortunately I made it to the train station in time, where I was met by enthusiastic Ek, who is used to early mornings. Ek works in downtown Bangkok at a company that offers year-long exchanges abroad to well-off Thai high school students. He lives somewhere up in the country (Nonthaburi?), and commutes by taking a bus to the nearest BTS train station. We’d hooked up on the Couchsurfing website, and had already met for lunch at the Terminal 21 food court.

So much time inside a train would give us the opportunity to get to know each other in depth, but, while the train sluggishly made its escape of the tentacles of the Bangkok urban sprawl, we made it our task to catch some sleep.

Nakon Pathom was the first scheduled stop. A fitting one, as this town offers the sight of Phra Pathom Chedi, one of the tallest pagodas in the world. And yet, the 40 minute-long stopover is a bit too tight for visiting the temple, and allows for little more than a photo shoot.

“I need a coffee” I solemnly declared after the last photo was taken.

“That’s OK. Do you like Thai coffee?” Ek asked.

“OK. Thai coffee and Jok!” he concluded, cheerfully, as he lead me in the direction of the chedi.

And there it was, in a breakfast stall affording views over the golden chedi, that I was introduced to the rite of jok, that is, rice porridge for breakfast. The full deal, with chunks or pork liver and other unnamable delicacies thrown in. 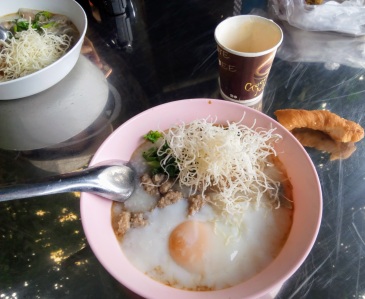 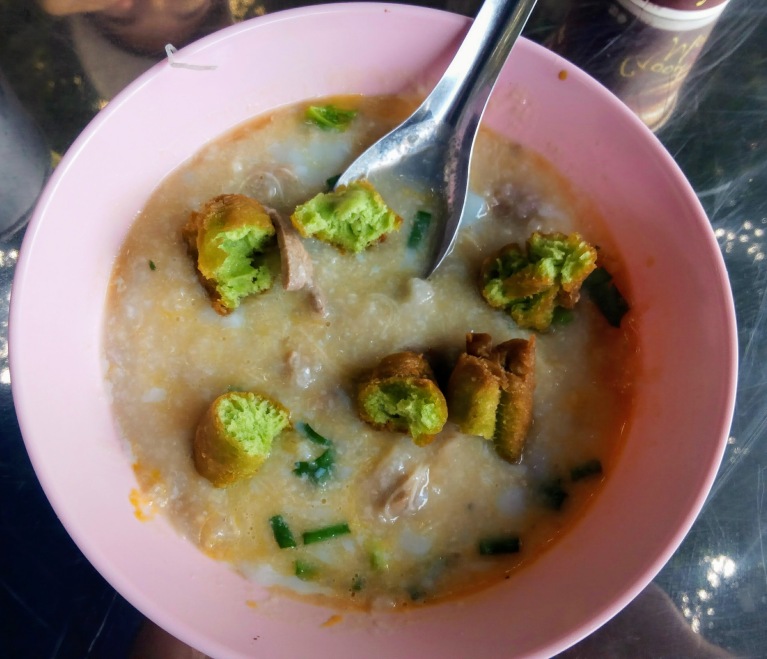 “It’s, hmmm….interesting”, I offered. Little did I know back then that, in time, a plate of jok would become the best reason to get out of bed in the early hours of my Thai days.

“We have to run back to the train”, announced Ek, who took my hand and guided me through the increasing human traffic flowing toward an incipient morning street market.

That didn’t feel good. The hearty rice porridge was weighing me down. I broke into a sweat – the first of many to come that day.

For more details on the Kanchanaburi tourist train, click here.