During my travels in South East Asia, I’ve met the most varied bunch of travelers. In a sense I’ve felt like a character of Chaucer’s Canterbury Tales meeting other pilgrims on the way to Canterbury. When spending so little time together, each traveler feels like an exemplar of a type (the party animal, the cheapo backpacker, and so on) and yet, like Chaucer’s pilgrims, each has a unique and lively story to tell.

Of all these types,  perhaps the most inspiring one I’ve met is the solo Asian female traveler – especially the Thais.  Few and far between, for sure, yet shining forth with their bravery and passion for discovery.

Take K., who I met in Krabi. She’d flown to Phuket from Chanthaburi, her hometown, then taken a ferry to Nopparat Thara pier, close to Ao Nang. Ironically, she made the same mistake I made, that is, stay in Krabi town rather than Ao Nang. Even worse – she booked a hotel that was in the Northern part of town, as far as 3 km away from the main sights and markets in town.

“Why did you pick that hotel?” I asked her.

And no, she hadn’t read travelfish.org. Not even Tripadvisor, or whatever online travel forums they have in Thai cyberspace.

The day we met, she welcomed my assistance in getting to Railay Beach and back to town from Ao Nang port.  That evening, we had dinner together in the chilled out Chaofah outdoor eateries, where she finished telling me her story. 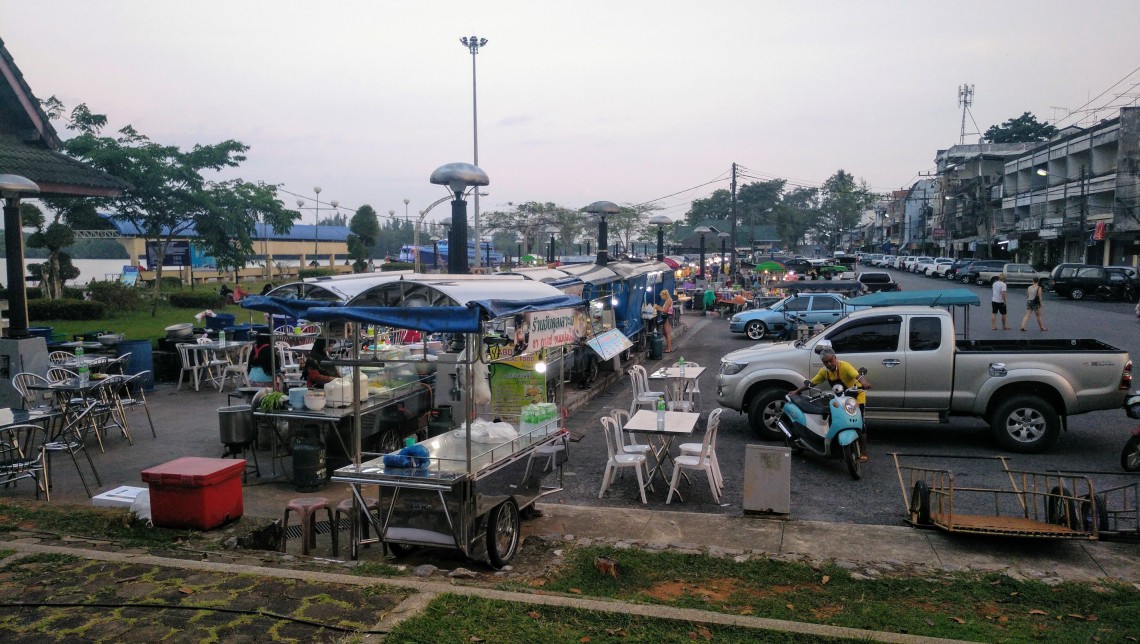 A nurse, K., got itchy feet and started traveling solo, initially because none of her girlfriends were able to join her, but she wanted to get to know he own country, her beautiful prathet Thai (Thai kingdom). This way,  she had got to visit nearby Pattaya and,more ambitiously, Chiang Mai in the North. This was her first trip South.

“And how do you meet people?”

Hmm. I told her about couchsurfing, where she would surely meet like-minded, or at least open-minded travelers, both female and male.

When we were about to part ways, she gave me the look or, shall I say, the smile – that’s assuming I can decipher the manifold Thai smiles. Not the look as in, “hey, I really had fun with you today, let’s have a drink and see where that takes us.” Rather, it was more like, “you are so nice. I wish I met more men like you. Please take care of me.”

I wish it had just been K. But I’ve seen that look before in each of my trips in SE Asia. Ploy once explained it to me, when I met her in Ko Samet.

“In Buddha, men are higher than women”, she said matter-of-factly.  And this was Ploy, who owned a car I could never dream of buying and was paying mortgage on a condo in an up and coming area of Bangkok while living with, and fully supporting, a single mother and two lazy brothers. Ploy: talented, hard-working yet sanuk like there’s no tomorrow.  I wonder what the Buddha would say about her being “up” or “down”.

I walked K. to the main road where we waited until a motorbike taxi appeared. I explained that I had a prepaid guesthouse in Ko Yao Noi, the following leg of my trip, the following day, so no way I could hang out with her the following day.  I wished her luck trying to find a motorcycle rental who would rent bikes to Thais, not just farangs, and getting to visit Krabi region’s famous emerald pool.

Challenge 1: for all solo travelers. It requires some mental stamina to travel on your own. The setbacks, the feeling of loneliness when you get sick or things don’t quite work out as you expected. The feeling you get sometimes, quite close to the truth if you ask me, that very few people back home actually give a shit about what’s going on with you.

Challenge 2: Being a woman who travels on her own.  Having to put up with the catcalling, unwanted offers of help, dudes of every race pestering them under the assumption that eventually they’ll give in and want  to hang out. Guys (locals and foreigners alike) turning their heads around to check out their asses, or tut-tutting when they notice a tad more hair on their legs or armpits than is considered to be feminine. And that’s leaving aside issues of safety.

Challenge 3: being an Asian female solo traveler. Many of them have been trained  since birth to be despondent, to be paralyzed by decision-making and spontaneously look for the company and guidance of a male.  So when, like K., they decide to travel on their own, family and friends will look at them like they’re lunatics.

For all this, when I see them out there, going solo, I can’t help but feel inspired, curious…maybe even attracted, why not. After all, I like girls, I like backpackers and I like Asians.

But no. It won’t be me pestering them, not even out of good faith. No turning my head around – not even to check the brand of their backpacks. Let them get on with their travels – their little yet steady steps toward freedom.